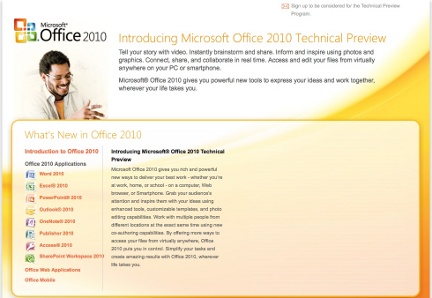 On Thursday Microsoft announced their purchase of Office.com, a domain previously owned by ContactOffice, an online office service. The next version of Microsoft’s office suite, Office 2010, reportedly includes a web-based version. The web-based version will be part of their Windows Live service and will be compatible with browsers other than Internet Explorer, like Safari and Firefox.

Microsoft did not offer the details of the transaction or their plans for the new site; however, ContactOffice released a statement on the site announcing that they were moving to ContactOffice.com.

“As you know from the recent email we sent you, we will be transitioning the operation of your Virtual Office account to ContactOffice.com during the next 30 days,” reads the current message on the site. “As part of this transition, on Monday, June 29, 2009, we changed email addresses in the office.com domain to ones in the contactoffice.com domain.”

Microsoft’s new online version of MS Office is part of the company’s push into cloud computing and is seen as a direct answer to Google Docs, which offers competitive office applications in a web-based environment. Many people users refer to Microsoft Office simply as Office. Therefore, it makes sense for them to acquire Office.com, which they hope will become the online standard, just as it is currently the desktop standard.

Previous Should there be price caps on new gTLDs?
Next Nokia Rescues Ovistore.com