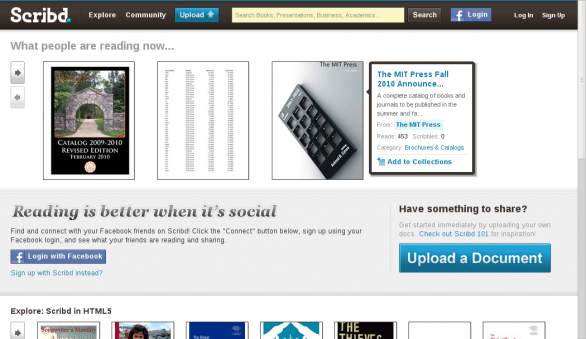 Scribd CTO Jared Freedman has announced that the document sharing website in HTML 5, abandoning the proprietary Adobe Flash application that has powered their site for the past three years. The move comes days after Apple CEO Steve Jobs offered his manifesto against flash and why it was bad for touch devices like the iPad.

Web developers have long had a love-hate relationship with Flash. Some would build entire sites based on it, while others shunned it for its lack of Web standards compliance, high CPU requirements, and proprietary license. For most web hosting companies it will not matter either way in the short term, anyone with a website will need to consider what devices are supported by their website.

Scribd will move to a Javascript/CSS/HTML5 web application that works better with their interface.

“Why do you need a special reading application just to view a document?” asked Friedman.

Unlike Flash, which requires the installation of a third-party plugin, Javascript and HTML are built into all modern browsers and are becoming increasingly popular. Many of the cross-browser consistency problems that drove developers to use Flash have since faded away, especially with Microsoft moving closer to standards compliance with each new Internet Explorer release.