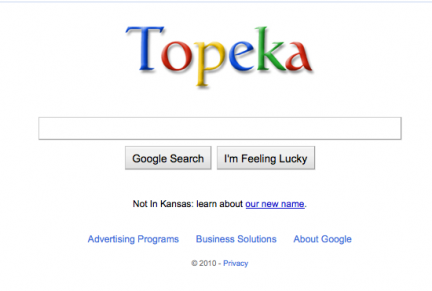 If you didn’t figure it out earlier, by now you probably know that today is April Fool’s Day. In keeping with its tradition of pranks and cranks, Google “changed its name” to Topeka.

Recall that some time ago, the American city of Topeka, Kansas, temporarily changed its name to Google in order to market itself for the company’s “Fiber for Communities” program. On its blog, the Mountain View company states:

We didn’t reach this decision lightly; after all, we had a fair amount of brand equity tied up in our old name. But the more we surfed around (the former) Topeka’s municipal website, the more kinship we felt with this fine city at the edge of the Great Plains.

…Our new product names will take some getting used to. For instance, we’ll have to assure users of Topeka News and Topeka Maps that these services will continue to offer news and local information from across the globe. Topeka Talk, similarly, is an instant messaging product, not, say, a folksy midwestern morning show. And Project Virgle, our co-venture with Richard Branson and Virgin to launch the first permanent human colony on Mars, will henceforth be known as Project Vireka.

Does this mean Google plans to select Topeka as the pilot city for its fiber project? According to Google Topeka, the name-change is a “one-shot deal” and will have no effect on which city is chosen.

Previous Speculators scramble for Apple iPad domains
Next How do I enable SSL/TLS in Dovecot mail server?